I was interviewed by a friend of mine, Cody Allen, for a public speaking class at the Art Institute of Orange County.  He's a student of Graphic Design.  This is probably the most comprehensive interview I've ever done.  Here's more information about myself than you probably ever wanted to know..... 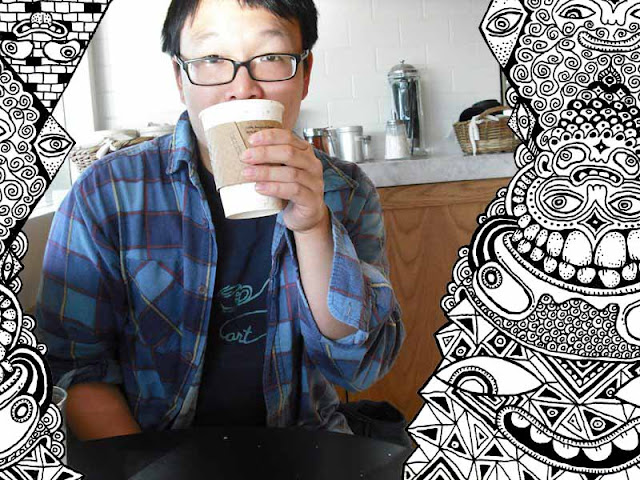 Cody Allen interview, March 2011
What got you started with art and how did you decide to do it as a career?


I’ve been drawing my whole life.  Like many artists say, I started drawing and coloring like everyone else as a young child, I just never stopped.  The notion of being an artist as a career is an interesting concept to me.  In retrospect I think my decision to become a professional artist came from youthful fantasy and naivety.  However, without that naivety, I don’t think I would have even tried.  I’m glad I chose to live an impossible lifestyle.  It made my life more interesting.
About 5 years ago, I had this crazy idea that I was going to be a graffiti artist for a living.  It was probably due to all the media attention that graffiti art was getting at the moment.  Two years into that fantasy, I realized that graffiti artist wasn’t the best occupation when I was sent to court with 6 counts of vandalism on me.
Graffiti did however teach me about the power of images and the idea of propaganda.  In the short period of time that I claimed to be a graffiti artist, I had legitimately established a certain level of fame and recognition.  The experiment was to draw small characters on every bus stop or bench in a college campus.  After only a few months of doing this, everyone on campus could recognize my characters to the point where people were posting the characters as profile pictures on Facebook.  It was fun and exciting to me.
My early experiences in graffiti gave me the confidence and evidence to believe that I had the power to affect people through my artwork.  It was this that probably encouraged me to take art more seriously and pursue more legitimate forms of art making.
How did you get to the position in the art world that you maintain today as far as getting your name out there?
I continued to pursue art in a more legitimate fashion in college by hosting art exhibitions through the UCSD student galleries.  I also did a number of t-shirt designs and flyers whenever people needed artwork.  When I had graduated, I was fortunate enough to land a publishing deal with Billy Martinez of Neko Press Comics.  I published the book Chocolate Milk and Doughnut Doodles in 2007.  This was a blessing to me and jumpstarted my career as a cartoonist in a big way.  Billy invited me to promote my new book at the Wonder-Con in San Francisco and later the San Diego Comic-Con.  Though these experiences I was exposed to a large portion of the cartooning and comics scene in the west coast.
Since then, I would say that I jumped at every opportunity that was given to me that had anything to do with art at all.  I claimed many different titles as an artist.  I marketed myself as a live painter, a fine artist, a graffiti muralist, a comic book artist, an art teacher, and a graphic designer.  I really had no idea how to do most of these things, but I learned as I went.  I’ve come to think that is may be the only way an artist can survive now a day, but that is only my opinion.
Through the hustle I was able to hone my craft and make a name for myself.  If you check my artist history, I’ve probably done over 100 shows and been published in over 50 magazines and art publications in the past 4-5 years.  The internet helped a lot too.  Despite what people might say now, MySpace was a huge deal for me as a new artist.  I got a ton of shows and opportunities through that network.  As time went on I was given better opportunities and better compensation.  Life still isn’t easy, but I’ve become far more comfortable in what I do.
Who are your personal inspirations and favorite artists?
Over the past few years, I’ve been inspired by a growing drawing and cartooning movement.   It has yet to be adequately definitely in my opinion, but it is something that I have been following and participating in for the past 5 years or so.  I would describe it as having its origin in comics and art zine culture.  The drawings appear to be stream of consciousness, pattern based, psychedelic, cartoon cluster images.  I call it the doodles art movement, but I’m sure it will acquire a better name in due time.  A few of the artists who seem to define this movement include Luke Ramsey, Marc Bell, Michael Deforge, Shobo Shobo, and Paper Rad.
Yesterday I watched the movie the Social Network.  I’ve been inspired by Mark Zuckerberg and the whole Facebook phenomena.  Other things that inspire me include films by Alexandro Jodorowsky, music by David Bazan, Lewis Carol, Shel Silverstein, Salvador Dali, Super Mario Brothers, Burning Man, circuit bending, the internet, and Cirque Du Soleil.
What kind of physical environment do you find suitable for when you are producing your work?
I usually work wherever and with whatever I can get.  The best space I’ve ever had access to was a two car garage that I converted into an art studio and gallery space.  This space was great for working on large scale pieces.  At the moment, I’m converting a shed space into my new studio.  It’s about 18ft deep,  4 ½ ft wide.  I finished insulating it and I’m currently dry walling it.  I can draw anywhere though.  I used to draw for hours on buses, trains, coffee shops, donut shops, whatever.

What is your favorite medium(s) and surface to create it on?
I prefer painting on wood rather than canvas.  Wood panels are sturdier and allow for rougher styles of mixed media work, including techniques such as carving, nailing, collage, and toner transfer.  Lately I have been using enamel house paint rather than acrylics.  I’ve also started playing around with my jigsaw and have created some interesting wood sculptural pieces.

What is the most controversial thing you have done or been hired to do as an art piece?
I once painted a piece called Naked Dance Party.  It consisted of a bunch of rainbow colored naked cartoon characters with flapping penises and boobs.  They were dancing.  It was for a Christian organization.  The theme was race and multi-cultural acceptance.  I’m not anti-Christian or anything.  I really thought the painting worked for the theme.  They made me redo it.

How was it designing and working with Hurley and Volcom? and what was your creative process behind the designs you came up with for them?
I worked with Volcom first.  I only sold them one design, so I didn’t get very involved with that particular company.  They chose a piece that I’d already done from an art zine that I had published.  I then reworked the pieces so that the logo would be in the design.
A promotion company found out about me later and interviewed me for Hurley’s website.   Hurley did the same with me and chose three designs that I had previously done.  Since then I’ve worked on three custom designs for them.  I’ve participated in an art show for Hurley as well called the “Anti-Canvas Art Show” in Honolulu, Hawaii.
There’s isn’t much of a creative process for coming up with custom designs.  It’s more about giving them what you know they want.  For the most part, I think companies want what you are already creating at the moment.  You don’t want to stray too much from your established style.

How did you come about developing your style of drawing/art?
I started seeing certain types of these stream of consciousness psychedelic illustrations in art books and illustration magazines.  Over time I began to recognize artists such as Luke Ramsey, Marc Bell, Peter Thompson, Ron Rege Jr., and Paper Rad.  This came at a time when I became frustrated with spending days on well rendered acrylic paintings.  I soon began to “doodle” obsessively.  I drew 3-5 drawings a day on 6inX8in drawings paper and started giving them away.  I probably drew and gave away over 100 of these drawings.  This obsessive drawing helped me establish a visual vocabulary of characters, fonts, patterns, and themes.  I am now able to apply these patterns and themes to more refined and well rendered pieces.

What kind of music (if any) do you listen to while creating art?
I typically listen to whatever I have access to.  For a while I lived with a DJ who would burn playlists for me to listen to.  He was into Dub-step music, Anticon Records, and Animal Collective.  I also tend to listen to the music that my friends make.  I know a lot of musicians and tend to listen to their music a lot; a rapper named ARTOO, Left in Company, Old Man Hands, Telepathik Friend, Denizen Kane, Mista Cookie Jar, the Drone Tones.  I also listen to independent radio.  In LA I listen to a lot of KXLU, 88.9FM.  In OC I listen to KUCI.

What is one goal with your art that you aim to accomplish in the future?
I want my food, clothes, and shelter to come from the art that I create.  I want to know that my art is what keeps me alive.  I guess I've been doing this for a while now with part time jobs here and there, but I want to develop a system that makes this process a bit more sustainable.  I also want to be exposed to artwork that no one has ever seen and I want to meet the artists that create that stuff.  I guess these are two goals, but I think they are both important to me.

And lastly, what would be your words of advice to someone such as myself just starting out in the art world?
You need to realize that creating art is what you should always be doing.  Don’t get caught up in networking, self-image, schmoozing, or politics of the art world.  Just produce artwork and continue to do it.   The only way that you can hurt yourself as an artist is to not create new artwork.  Keep producing until the canvases are piled to the roof, then set them free to the world and start over.