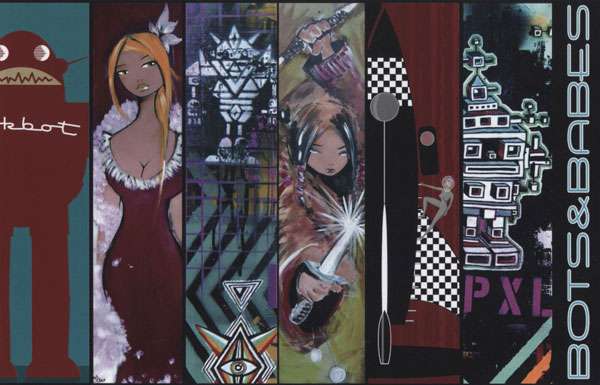 LOCATION:    The San Diego Art Department (SDAD) is on Ray Street in North Park one block east of 30th, just south of University.

SPECIAL FEATURE:  Featuring art work by Alex Chiu, Dan Bois and Billy Martinez
This exhibit brings together the best in Sci-Fi fantasy and sexy fun, with various styles that will catch the eye. Enjoy many styles of art for this show; whether it’s digital, acrylic, oils, or house paints it’s all here in Bots and Babes.

Alex Chiu
I am currently wandering Southern California trying to make art as often and as much as possible. I believe that art has the power to speak to the heart, challenge the mind, and depict the soul. My dream is to unite, inspire, and bring hope to people through my artwork. (Alex Chiu) alexchiu.carbonmade.com/

Dan Bois
Born the day after Sputnik was launched, Dan works 9 to 5 as a graphic artist for local government. On Dan-time he brings to life WWII aircraft, mermaids, robots, aliens, witches and rocket ships. He began life as an artist 50 + years ago when he was caught red-handed doodling at school instead of taking notes.
Dan first displayed his art at the San Diego International Comic-Con, and then shared a booth with Billy Martinez at Oktoberfest, and finally added the Rolando Street Fair (since it was in his own La Mesa backyard.) Now his fans seek him out at these venues. Dan art is created on paper with pencil and ink then brought to digital life with a computer and Adobe Illustrator. (Dan Bois) danboisgraphics.blogspot.com/

Billy Martinez
As with many children, comics began as an escape from reality for Billy Martinez. However, after successfully creating his own comic series, Martinez began exploring the genre further and found his niche. Since then, his clients have included Qualcomm Communications, the Sci-Fi Channel, and Starbucks. Martinez also runs the Neko Press Art Studios in La Mesa, where he teaches 17 classes a week. Currently, Martinez is working on creating 1,000 paintings for his Girls series. (10/09 944.com) www.nekopresscomics.com/