The Imagy Nation by Ronald McCants

For the past month or so I've been working an a short animated piece for a children's TV pilot called The Imagy Nation, written and produced by Ronald McCants. So far, I've been in the planning stages. check out some of my character designs and storyboard. I will keep you posted until I upload the final animation. 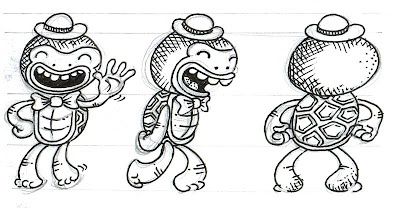 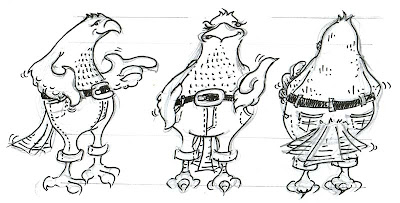 --Hawk knocked on Turtle's door. Hawk said, "Turtle, I'm
very hungry. I don't have any food." So, Turtle, who had
saved food throughout the year, invited Hawk into his home.
Turtle didn't have much food to share, but he fed Hawk a
great meal. Hawk thanked him and flew away.

The next day, Hawk showed up at Turtle's door at the same
time. The very generous turtle, invited Hawk in again. He
fed Hawk another meal. This they did for a number of weeks.
Hawk would eat Turtle's food, then fly back to his home in
the mountains.

Turtle didn't know that when Hawk would fly away, he'd laugh
to himself and say, "Turtle doesn't know I have lots of food
on my mountain. I'm never going to share with him." One
day, Turtle's good friend Jackal who lived in the mountains
overheard Hawk and told Turtle what Hawk was doing.

Turtle became very sad. He decided to take a visit to Hawk's
home. Mountains are really hard for Turtles to climb, so
Jackal gave him a ride up the mountain. Turtle knocked on
Hawk's door. Hawk opened it and was surprised to see Turtle.
Turtle saw all the food Hawk was saving for himself. Turtle
said, "I'd like to share a meal with you in your home."

Hawk sent Turtle away from his home. He said, "I'll never
share with you!" He was telling the truth. He didn't share
a single meal with Turtle.

The next year, during the Hungry Season, Hawk really didn't
have any food and asked every animal in the village for a
meal. But, everyone heard about how selfish Hawk was. Hawk
came to Turtle's door again, begging for food. This time,
Turtle didn't open his door for Hawk. Instead, Turtle gave
him a yam through the window and said, "You’re not a good
friend because you are selfish. You took advantage of me.
Never come back to my door, please."

Hawk went away from Turtle's house with his one yam and was
forced to think about his selfishness. 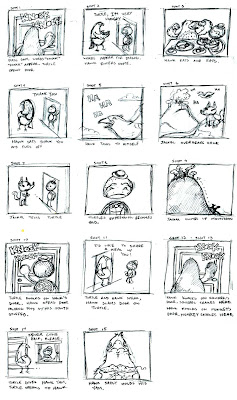